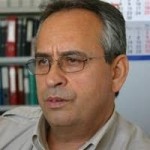 He started his carrier as a research engineer at the R&D department of the company ENRAF-NONIUS in Delft, The Nederlands. He entered academic research at the Research Center of Crete where he established the underwater acoustics lab for biomass estimation. After the exercise in acoustics, he extended his research interest in the commercial fishery research at the Institute of Marine Biology of Crete where he established the national monitoring system for the Greek commercial fishery. Later, after the integration of the main fishery research organizations of Greece, he joined the Institute of Marine Biological Resources and Inland Waters where he focused on fishery economics and fishery policy issues.

He participated in 38 research projects, having the scientific responsibility in 27. The majority of them were large research and development programs in Greece, the Balkans, the Mediterranean and Africa. He participated as expert in several working groups of DG MARE, dealing with the Common Fishery Policy in EU, as well as the Greek fishery council. He is a member of the Technical Chamber of Greece.

He has research interests on fishery management, fishery economics and fish stock enhancement.

He has contributed 6 papers in peer-reviewed journals, 2 book chapters, 2 books, as well as more than 40 publications in conference proceedings.