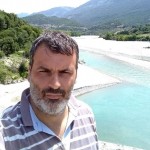 Dr. Elias Dimitriou is a Researcher with expertise in Water Resources Management, wetlands protection and biodiversity conservation. He received his BSc in Geology from the University of Athens and attended successfully the MSc in Environmental and Ecological Sciences at Lancaster University – UK, during the period 1998-1999.

He started working as an external assistant at the National Centre for Marine Research (NCMR) in the year 2000 with main tasks that included hydrologic and water resources management studies focusing on the environmental water demands (www.life-trichonis.gr).

In 2007, he was granted a Post-doc fellowship from the Hellenic State Scholarships Foundation for a research project entitled: ‘Assessing groundwater vulnerability and risk methodologies and quantifying the relevant impacts from land use changes’. He also became a visitor Lecturer at the University of Ioannina, Department of Environmental and Natural Resources Management and taught the modules of Hydrogeology and Hydrology for 3 consecutive semesters. At the same year (2007), he became a permanent Researcher in the Institute of Inland Waters – HCMR.