The history of the Hellenic Centre for Marine Research (HCMR) begins in 1912 when the Greek Government decided to establish an institute that would focus on the study of the marine environment.

The Italian Professor D. Vinciguerra, that was invited to offer his services as a consultant,  proposed the creation of a Marine Hydrobiological Station, that was finally established in 1914 at Paleo Faliro. In 1915, the Marine Hydrobiological Station begun to conduct fisheries and marine biological studies. In 1948, it changed its name to Fisheries Research Laboratory and placed under the supervision of the Ministry of Agriculture.

After the Second World War (1945), the Greek Hydrobiological Institute of the Academy of Athens was founded. This Institute, based in Piraeus, incorporated in 1947 the Hydrobiological Station of Rhodes, which had been founded by the Italians in 1934, as Reale Istituto di Ricerche Biologiche di Rodi.

In 1965, the Hydrobiological Institute of the Academy of Athens, together with the Fisheries Research Laboratory, were incorporated to the newly established Institute of Oceanographic and Fisheries Research (I.ΩK.A.E.), which became operational in 1970. In 1985, under Law 1514, the National Centre for Marine Research (NCMR), the successor of I.ΩK.A.E., was established and placed under the supervision of the General Secretariat for Research and Technology (GSRT) of the Ministry of Industry, Energy and Technology (currently under the Ministry of Education and Religious Affairs).

In 1985, the oceanographic vessel ” Aegean” of NCMR, which was then the main research body for marine science in Greece, was built in the shipyards of Chalkis. In 1987, the Institute of Marine Biology of Crete (IMBIC) was founded in Heraklion, Crete. The IMBIC grew rapidly and, with its research vessel “PHILIA”, contributed significantly to the scientific fields of marine biology, fisheries and aquaculture.

In 2003, under Law 2919/2001 “Linking Science and Technology with Production”, the Hellenic Centre for Marine Research (HCMR) was established,

Dr Economou served as first acting director of the newly founded IMBRIW, while its current director Prof. Stergiou was elected in April 2013 but officially assumed his duties on the 4th of November 2013.

A brief description of the historical development of IMBRIW is depicted in the chart below. 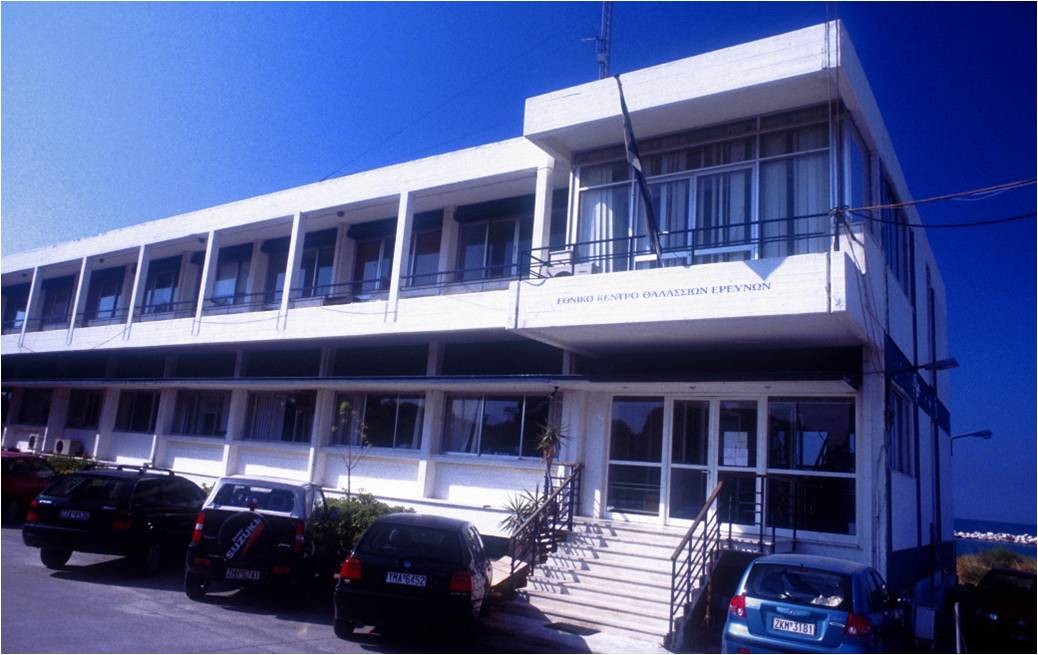 NCMR and its parent entities had a long tradition in fisheries research and a small but dynamic organization of fisheries researchers have been working since the beginning of the 20th Century. Research in inland waters was late in coming to Greece, and NCMR’s institute of Inland waters (IIW) was the first such entity in any academic or governmental organization. However, a distinguished group of researchers and associates studied inland water themes at our parent institutions at least since the late ‘70s. The actual establishment of the IIW took place in 1994, when the provisions and procedures dictated by the Law (1514/85) were completed with the election of the Institute’s first director.

A remarkable increase in research and development took place after the mid-nineties in both fisheries and inland waters. The policy-relevant research was boosted by major Environmental EU Directives (e.g. work within the framework of the Birds and Habitats Directives- BHD, and slightly later the Water Framework Directive- WFD). IMBRIW also works closely with the other Institutes of HCMR. HCMR’s public outreach capacity increased greatly when in December 2005, the Cretaquarium in Heraklion was opened, one of the largest aquariums in Europe.