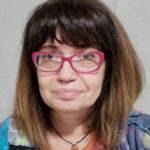 Dr. Evgenia Lefkaditou, since December 2016 is a senior researcher at the Institute of Marine Biological Resources and Inland Waters (IMBRIW) of the Hellenic Centre for Marine Research (HCMR). She was a post doc researcher from 2006 to 2016 and a contracted research assistant from 1995 to 2006 at the Institute of Marine Biological Resources (IMBR) of HCMR. During 1994-1995 she acted as Leader of Research Team of “TEUTHIS” Association. She has held a position as Functionary (1988-1993) and as Fishermen Consultant (1985-1988) in Fisheries General Directorate of the Ministry of Agriculture where her activities related to the EU Mediterranean Integrated Programmes.

She is an expert on cephalopod species taxonomy, diversity, life history and fisheries. In the framework of her studies on age and growth in squid species, she developed an ageing methodology based on the interpretation of statolith  microstructure by use of image analysis technique.  Then, applying a similar technique on fish otoliths, she was involved in the validation of the first annulus and the standardization of ageing methodology for commercial fish. Since 2008, she focused her activities also on the effect of  Lessepsian Non Indigenus Species on fisheries,  getting the chair-person of a relevant Network of Experts (2010-2013) established in the framework of the FAO EastMed Project (FAO regional project “Scientific and Institutional Cooperation to Support Responsible Fisheries in the Eastern Mediterranean”). Recently she was involved in activities related to the effect of fisheries on vulnerable fish species in the framework of the implementation of MSFD-D1 criteria for the assessment of their population status in the Hellenic Seas.

She  has participated in more than 30 national and international Research programs and has been member of International Working groups on Cephalopod Fisheries and Life History (WGCEPH, 2002-2021); Age estimation of European hake (WKAEH, 2009-11); Biological Parameters (WGBIOP, 2016-2021); By-catch of Protected Species (WGBYC, 2020-2021). She has also been elected member of Cephalopod International Advisory Council (2003-2009) and recently she was appointed as a member of the MSFD Biodiversity Expert Network (2021-2022) coordinated by

Since 2006 she has supervised students for internships, as well as for BSc and MSc theses, whereas, from 2008 and on, she has been giving lectures relevant to “Cephalopods life history characteristics, abundance temporal variation and fisheries” to postgraduate courses of the University of Athens.

She  has contributed 50 articles in peer-reviewed Journals, 5 chapters in Books, 3 books (dissertation and theses) and  more than 100 other publications (i.e. conference proceedings, special publications, newspaper and magazine articles).