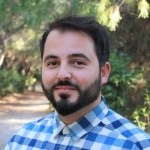 Dr. George Varlas is a research associate at the HCMR since 2018. He is a member of the Hellenic Meteorological Society. He received a B.Sc. in Physics and a M.Sc. in Environmental Physics from the Kapodistrian University of Athens, Department of Physics, in 2010 and 2012, respectively. He continued to work in this field and received a Ph.D. in 2017, with a thesis on “Development of an integrated modeling system for simulating the air-ocean wave interactions” from the Harokopio University of Athens, Department of Geography

He has won 3 awards with the most significant the Young Scientist Award 2018 from the European Meteorological Society (EMS) for his journal publication: “Varlas, G., Katsafados, P., Papadopoulos, A., and Korres, G. (2017). Implementation of a two-way coupled atmosphere-ocean wave modeling system for assessing air-sea interaction over the Mediterranean Sea, Atmospheric Research Journal, 208, 201-217”. During the period of his doctoral research he was supported by a 3-year (2013-2016) research fellowship offered by the HCMR.

His doctoral research was dedicated to the simulation and analysis of air-ocean wave interactions and their impact on cyclone formation, leading to the development of the Chemical Hydrological Atmospheric Ocean wave System (CHAOS), an integrated modeling system. CHAOS was employed to analyze the impact of ocean waves on the air-sea momentum-heat-moisture exchange and, subsequently, on processes in the atmospheric boundary layer and the middle-upper troposphere. CHAOS supported the investigation of understudied phenomena such as air-sea spray and rain-wave interactions. CHAOS represents the air-sea-land interactions offering the capability of fully coupled hydrometeorological modeling to simulate water and energy cycles as well as flash floods.