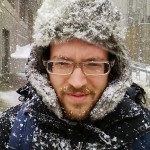 Dr. Ioannis Leris received his BSc in Biology in 2006 from University of Crete in Heraklion. There he joined Prof. Maroudio Kentouri’s Aquaculture lab and studied the effects of rearing temperature on body shape differentiation in zebrafish (Danio rerio) for his BSc dissertation.

He conducted his MSc research project in the same lab, studying the effect of sex and rearing temperature on zebrafish swimming performance. During his undergraduate and graduate studies he participated in various other projects on fish morphology, physiology and aquaculture, mainly examining early-environment effects.

He started his PhD in 2010 in the Behavioural Biology group of Utrecht University and Helmholtz Institute, under the supervision of Dr. Simon Reader and promoted by Prof. Johan Bolhuis. In his research project he examined the development of social behaviour in guppies (Poecilia reticulata); again focusing on the influence of early-life conditions (social cues, predation regime and conspecific density).

A large part of this project was conducted in McGill University in Montreal, Canada, and it also included fieldwork in various rivers of Trinidad and Tobago. In January 2018 he joined the Institute of Inland Waters in HCMR as a member of the Ichthyologists team.

He has participated in 5 National and European research programmes. He has co-authored 9 publications in peer-reviewed journals and 14 other publications and extended abstracts in conference proceedings.