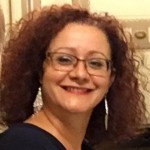 During 8/2010-8/2012 she has served as a scientific consultant of the “Panhellenic Union of Middle Range Fisheries Shipowners (PEPMA)”, and since 2/2013 she has held a position as a research associate in the Hellenic Centre for Marine Research.

She has research interests on fish systematics and distribution; alien species; fish biology and ecomorphology; feeding ecology of fish. She has participated in more than 30 national and international scientific projects.

She is a member of the editorial board of the following scientific journals: Acta Ichthyologica et Piscatoria, and Mediterranean Marine Science. She is also an official collaborator of FishBase (the largest electronic database on fishes), since 1999, and a member of the Greek group of FishBase consortium (since September 2004). Since 2018 she is the National Contact Scientist for Greece, in the ESENIAS network. Finally, she is a member of the experts group responsible for the development and management of ELNAIS (Ellenic Network on Aquatic Invasive Species) of HCMR.