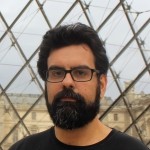 Dr.Kostas Stefanidis received a BSc in Biology in 2003 and a MSc in Management and Conservation of Natural Environment in 2005 from University of Patras. He completed his PhD in 2011. During his PhD thesis he investigated the role of aquatic macrophytes as a habitat for zooplankton communities in Greek lakes.

He has worked as research associate in Department of Biology in University of Patras from 2004 to 2014 participating in several national and European research projects (Cyprus WFD, EUMON, REFRESH).

In 2014 he joined the Centre for Hydrology and Informatics in the National Technical University of Athens where he worked for the EU funded project MARS. Since March of 2018 he has been working as a research associate in the Institute of Marine Biological Resources and Inland Waters.

He has more than 12 years of experience in ecological assessment of freshwater ecosystems based on biotic communities in line with WFD requirements. His research interests include the study of ecological processes in shallow lakes, the use of aquatic macrophytes as ecological indicators in rivers and lakes and the impact of climate change on freshwater ecosystems.He has co-authored several scientific articles in international peer-review journals, national and international conferences and technical reports.