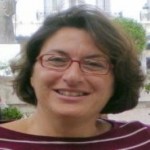 She has attended post graduate courses on the management of marine resources in the University of Crete.

She has participated in more that forty national and international research projects concerning fishery biology and dynamics of large pelagic and demersal species.
She is the national coordinator of the Mediterranean International Trawl Survey (MEDITS), and the scientific responsible for the large pelagic tagging campaign in Greece (conventional and satellite electronic tagging). She regularly participates in the working groups of the International Committee for the Conservation of the Atlantic Tunas (ICCAT). She is a member of the MEDITS Steering Committee.

Her research interests include fishery biology, dynamics and management of large pelagic, demersal species and invasive fish species, as well as experimental fishing surveys and fish tagging methods.
She has participated in the organizing Committee of several international Symposia and Workshops. She has contributed 22 papers in peer-reviewed journals, 6 book chapters, as well as more than 50 other publications (i.e. conference proceedings, special publications, newspaper and magazine articles) and co-authored 36 technical reports.

She was the first to identify and report the presence of the highly toxic invasive fish Lagocephalus sceleratus in Crete and participated in the campaign for raising public awareness on this issue.

She has succeeded to tag small juvenile swordfish with mini satellite tags for the first time.
She is on regular contact with fishermen, the public, as well as fisheries and port authorities for fish & fisheries issues.