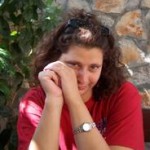 She has participated in 19 national and 12 international projects; in 8 of those she had financial coordination and project administration duties.She has contributed 12 papers in peer-reviewed journals, one book chapter, two books, as well as more than 35 other publications (i.e., conference proceedings, special publications, newspaper and magazines) and co-authored 43 technical reports.

She has also attended special training courses in electrofishing. In the past few years she has been a working member in one of the Scientific Groups of HCMR’s that cross Greece every spring and summer to monitor the ecological quality of our fresh water systems.

At the same time, as an active member of HCMR’s Education Unit, she welcomes schools in our facilities and share with the students the secrets of the aquatic world…