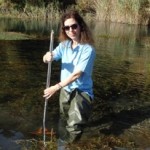 Theodora Kouvarda is  a technical scientist in the institute of Marine Biological Resources and Inland Waters for the last sixteen years. She received her BSc in Environmental Studies from the University of Aegean in 1997 and attended successfully an MSc in Pollution and Environmental Control at the University on Manchester, UK, during the period 1997-1999.

She has also attended a special training course on the implementation of River Habitat Survey (Accreditation No HP61 – Environment Agency), in 2002.

Her scientific interests are focused on river management (implementation of the European Water Framework Directive on the Greek rivers, reference conditions and classification of surface inland waters),  identification and classification of fresh water benthic macroinvertebrates and biodiversity conservation. She is an active member of HCMR Educational Unit. She has participated in more than 20 national and international projects.

She has contributed in a number of papers in scientific journals, as well as in other publications (i.e., conference proceedings, special publications, workshops announcements and technical reports).