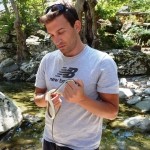 Dr. Ioannis Karaouzas is a Freshwater Biologist and Environmental scientist. His research interests mainly focus on the ecology, biodiversity and conservation of freshwater ecosystems. He is working on the effects of anthropogenic disturbances and climate change on benthic invertebrates, at species, population and community level, as well as, on the ecological status of river ecosystems.

He is also specialized on the ecology and taxonomy of aquatic invertebrates with main specialization on caddisflies (Trichoptera).From 2002, he has been a research associate in the Institute of Inland Waters (since 2012 Institute of Marine Biological Resources and Inland Waters). He completed his research doctorate in Ecotoxicology and Freshwater Pollution at the University of Ioannina (Greece), where he studied the impacts of agro-industrial wastewaters on stream ecosystems at different levels of biological organization.

He graduated from the University of Brighton (UK), where he studied Biology and received his Master’s degree in Environmental Pollution Sciences from Brunel University (UK). He has participated in 9 international and 12 national research projects, related to basic and applied ecology of river ecosystems, ecological status monitoring and assessment and integrated river basin management.

As for research, his H index (01/11/2018) is 10 according to the “Web of Science” of the ISI-Web and 11 according to “Google scholar”. He has published 84 scientific publications in peer review journals and 53 publications in national and international conference proceedings on the field of freshwater pollution, conservation and management, chemical pollutants, ecotoxicology, zoology and animal taxonomy.

He is a co-editor of the book “Rivers of Greece: Evolution, Current Status and Perspectives (Springer)” and author of 3 book chapters. He has collaboration with numerous respective scientists from Spain, Poland, Austria, Hungary, etc.